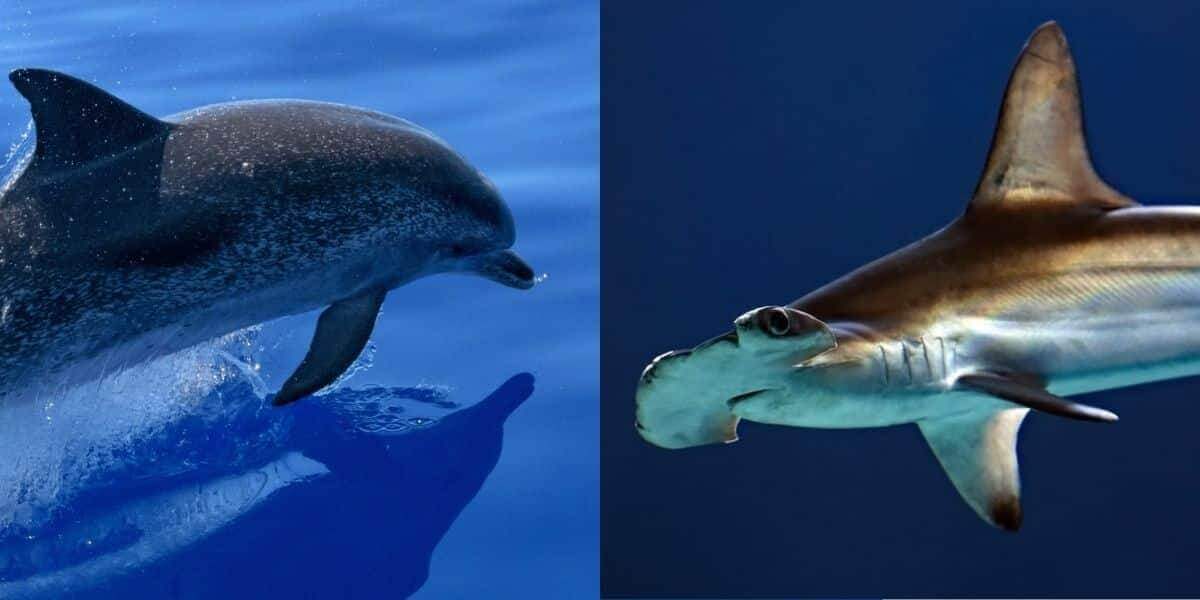 One of the primary differences between dolphins and sharks is that sharks are fish and dolphins are mammals. Sharks have gills alongside their bodies while dolphins breathe through a blowhole in the top of their head. These differences, and more, are explored below.

Main Differences Between a Dolphin and a Shark

Here are the top five main differences between a dolphin and a shark:

Dolphins are mammals. They are grouped into five families, the largest of which is the ocean dolphin (to which thirty-eight species belong). The remaining four are all river dolphin families with only one species per family.

Dolphins are among the most intelligent non-human animals on the planet. Studies regarding their aptitude suggest that they are capable of mimicking, have self-awareness, solving problems, have empathy, and can feel grief, playfulness, and more.

Dolphins are slimmer and sleeker than sharks are. They range in size from nearly six feet up to thirty-one feet. The largest type of dolphin is an orca, commonly known as a killer whale. These large predators can weigh up to 11 short tons. They are commonly considered one of the apex predators of the Earth’s oceans.

They can move at high speeds, up to 18 miles (29 kilometers) per hour through the ocean while hunting with long beaks or mouths. They also have a more pronounced smile or grin in comparison to sharks.

Dolphins also have a variable number of teeth, ranging from 14 up to 240 in the mouth of the spinner dolphin. The size of their teeth, as well as the position and shape, depends on their species. The majority of ocean dolphins have cone-shaped teeth used for catching fish.

As noted above, dolphins spend most of their lives near the surface of the ocean. This is due to the fact that, as mammals, they depend on air to breathe. They surface in order to utilize their blowholes, positioned at the top of their heads. They live in all the world’s seas and oceans, around coastal areas, or even in shallower water. Most often species prefer warmer climates.

Dolphins often feed by herding. This means that a pod moves a school of fish into a small group, commonly known as a bait ball. Individual members then swim through the group of fish, feeding as they please. Bottlenose dolphins and orcas have also been known to strand their prey on a beach to feed on it. This is another primary difference between dolphins and sharks. Sharks, as primarily solitary animals, have to utilize different hunting techniques in order to capture their prey.

Common prey for dolphins includes fish, squid, and jellyfish. Since dolphins are found around the world, they typically eat whatever fish they come upon. This can depend on the time of year.

Dolphins make use of echolocation while hunting as well. This allows them to hunt via reflected sound, or echos. They can use this to find prey and learn important information about the size and other characteristics.

In contrast, since sharks cannot vocalize. But, they have highly developed hearing that allows them to sense the prey through low-frequency sound. They hone in and then often bash into their intended meal, stunning it, before utilizing their powerful jaws. Sometimes, this results in both animals launching out of the water.

Dolphins give birth to one calf at a time. Their pregnancies last between nine and sixteen months. The babies then stay with their mothers for several years, a time period in which the mother teaches the child everything he or she needs to know to survive. Dolphins can live between twenty and eighty years.

In contrast to dolphins, sharks are fish that spend most of their lives underwater. Sharks have been classified into over 500 different species, ranging from the dwarf lanternshark to the whale shark. The latter is the largest fish in the world, reaching up to 40 feet in length.

Some sharks, such as the great white, have been portrayed as mindless predators. This could not be farther from the truth. Scientists have determined that sharks’ brain size is comparable, in regard to their entire body mass, to that of mammals. They have large brains and are capable of learning complex behaviors. They make use of complicated hunting patterns and show social learning (meaning that they learn from watching other sharks).

Even more so than dolphins, sharks range in their appearance. Most sharks are dull gray with vertically pointed tails, pointed snouts, and triangular teeth. Famously, sharks do not have a swim bladder. This means that they must continue swimming throughout their lives in order to keep from sinking and drowning.

Some sharks, like the hammerhead and megamouth shark, have more distinctive head shapes. While tiger sharks are known for their unique patterns.

Sharks range in size from only 6 inches long (the dwarf lanternshark) up to 40+ feet long (the whale shark).

Like dolphins, sharks are found in all of the Earth’s oceans. But, they generally do not live in freshwater. (There are some exceptions such as the bull shark which can be found in both seawater and freshwater.)

Several of the best-known species of sharks are known as apex predators. This means that they feature as the primary predator at the top of their habitat’s food chain. Apex sharks include the great white shark, hammerhead shark, tiger shark, and blue shark.

Interestingly, the great white shark and orca are often tied as the primary predators in the Earth’s oceans. Orcas, working in pods, have been known to hunt and kill sharks. In fact, scientists believe the orcas are responsible for the decimation of the megalodon population and its eventual extinction.

Most sharks make use of internal fertilization. But, there are others that lay eggs, such as the chimera and the skate. Species like bonnethead sharks and blacktips have been recorded utilizing parthenogenesis.

Dolphins and sharks have a few similarities when it comes to the shape of, and the number of fins, they possess. For example, sharks and dolphins both have tail fins, pectoral fins, and dorsal fins. But, they are different shapes. Dolphins’ dorsal fins, or the fins that break the surface of the water as they swim, are more curved than sharks’ dorsal fins. The trailing edge of a shark’s dorsal fin is far straighter than dolphins’. Their tail fins are also different. Sharks’ fins are vertical and dolphins’ are horizontal.

Can a dolphin defeat a shark?

Most dolphins are at risk of predation from shark species. But, the largest and most predatory species of dolphin, the orca, can hunt every shark species, especially when they work together in pods.

It depends on the situation. There were some recorded incidences and white sharks and dolphins swim side-by-side without any regard for the other. But, when dolphins feel threatened, they may antagonize sharks by ramming into them with their noses or their whole bodies.

Do dolphins protect humans from sharks?

There are several recorded instances of dolphins protecting human beings. For example, pods of dolphins have been recorded circling surfers for more than 30 minutes in order to ward off great white sharks exhibiting aggressive behavior. 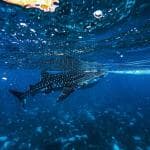 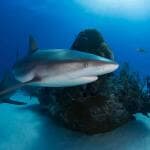