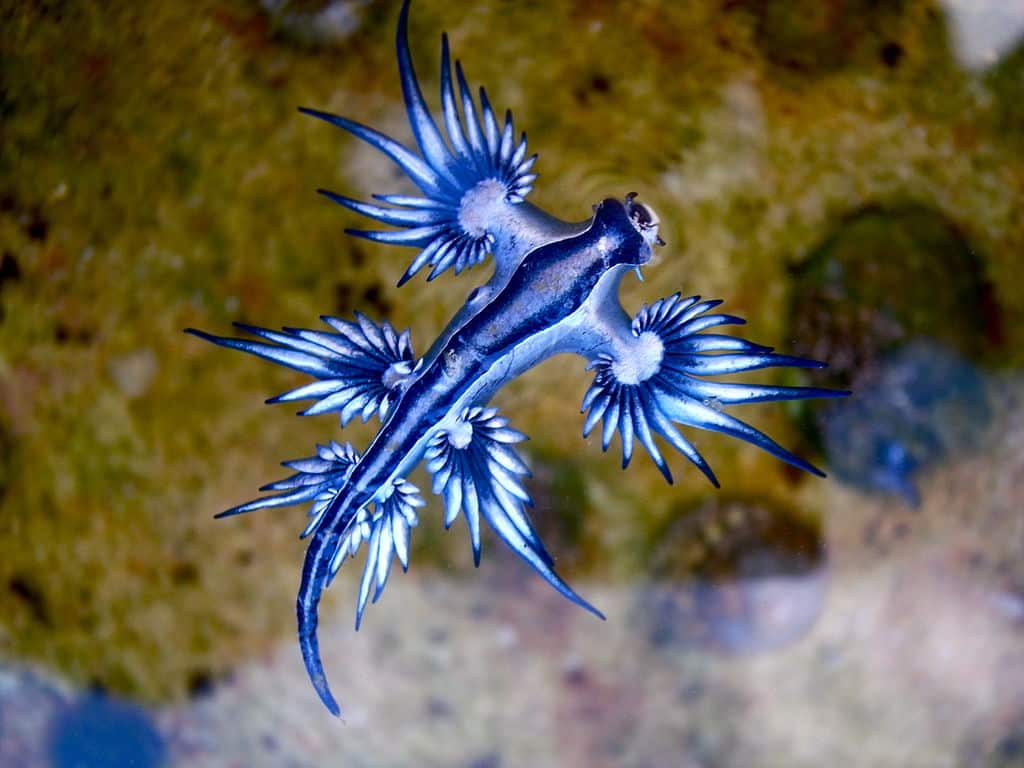 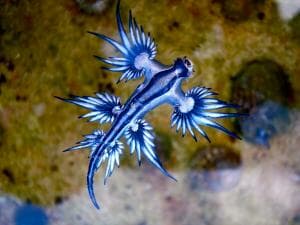 The bodies of Blue Glaucus are soft and shell-less and consist of 6 appendages that give rise to “Cerata” (tentacles like projection- usually ranging from 6-12 on each side) As majestic as they look, it’s probably a great thing that they hardly grow more than 1.5 inches because, despite their small sizes, they can prey on sea animals larger than their size, such as jellyfish. They have a unique buoyancy system in which their stomach contains a sac that fills with gas, allowing them to float to the surface upside down. The blue glaucus has many names such as the blue sea slug, blue angel, dragon slug, sea swallow, and many more.

Glaucus Atlantis are ocean creatures that are mainly found in the Pacific, Atlantic, and Indian Oceans. A large population of Blue Glaucus is found in European waters, in the Portuguese islands of the Azores. However, there is a possibility that their habitat is very vast and since they are so small they are hard to be quantified.

Unlike other nudibranchs that live on the deep surface, these blue dragons float on the surface. This is made possible by a gas bubble in the stomach. Although their skin color helps them camouflage on the surface, this position also gives them a disadvantage as they are more prone to being brushed onto land due to ocean currents. Even with this, the stings on their periphery are still active and protect them from any harm.

Blue Dragons are considered carnivores and their favorite meal is jellyfish: including blue button (Porpita porpita), the violet snail (Janthina janthina), the by-the-wind-sailor (Velella velella), and, most importantly, Portuguese Man O’ Wars. Jellyfish are known to have a great defense mechanism against their predator through their deadly stings, though this little fella of an ocean creature has a solution. As soon as they approach their preferred prey (aka the jellyfish), they release an inhibitory mucus that neutralizes the effect of a stinging capsule, helping the Glaucus to feed on their tentacles.

If the mucus doesn’t work for some reason, this cunning creature has another means to save itself. The hard disc on their skin is packed with spindles which are released on the encounter with stinging cells that are then absorbed in the body. Once absorbed some of these cells are digested, whereas most of them are migrated from the gut to the periphery where they are stored in the body for days to weeks.

The Blue Glaucus has some great methods of preventing itself from any surrounding dangers. Remember the stinging cells that were stored in the body? Glaucus’ bodies make them more concentrated and venomous. Toxic chemicals are released when a predator tries to hunt them, giving them a fiery sting. Talk about smart!

Their skin itself comes in handy to protect them. The upper body, which is blue, faces upward, blending with the ocean color and becoming camouflaged from airborne predators, whereas the lower silver part faces downward, merging with sun reflection on the ocean when looked from down below by predators.

Blue Glaucus are hermaphrodites, meaning they possess the ability to be both male and female, along with male and female reproductive organs. Their mating lasts for several minutes to an hour and since their whole body is loaded with stinging cells, they avoid touching each other as much as they can. The organisms intertwine their penises during the mating until the eggs residing in each of them are fertilized. Once this is established, they both separate from each other and lay their eggs. Within hours, several eggs are hatched into baby Glaucus without needing much gestational care.

There are only two organisms in the Glaucidae family i.e. Atlanticus and Marginatus. The latter looks quite similar due to the same color except that it’s generally smaller than Atlanticus. Another key difference in the external feature is the arrangement of tentacles. In Atlanticus they are arranged in a single row as compared to Marginatus where Cerate are arranged in multiple rows.

Other Facts about Glaucus Atlanticus

FAQs on the Blue Glaucus

Where is Glaucus Atlanticus found?

Glaucus survives in temperate and tropical ocean waters. They are usually found in the Indian, Atlantic, and Pacific oceans. Other places where blue dragons are frequently spotted are Mozambique, Big Island, New Zealand water, and Kauai. They are also seen on the shore sometimes after being carried by oceanic currents due to their small size.

How endangered is the Blue Glaucus?

Blue dragons have been classified as endangered species on the IUCN Red List. The exact number of remaining blue dragons is difficult to calculate since they are spread throughout the world.  However, it is clear that ever since their internet popularity, this species has faced tremendous loss. Majorly because, a lot of people try to keep them as pets and since their diet and mating habits are not suitable for a closed space, they usually die. Similarly, ocean pollution has been a horrible impact on their population.

What does a Blue Glaucus eat?

Glaucus Atlanticus (blue dragons) are considered carnivores as their diet primarily involve animals like jellyfish. Bluebottle and specially Portuguese Man O’war are some of their favorite meal. They don’t just use jellyfish for the food, but they also consume their stinging cells, store them and then use it on their predators during an attack.

Why are blue dragons dangerous?

Blue dragons store nematocyst, which are stinging cells, from their prey (Portuguese Man O war) and concentrates it in their bodies which means their poison is more dangerous than that of a jellyfish. This adaption is made to protect themselves from predators. So if you find them onshore, it better to just look at them from far and don’t try to pick them.

Can the Blue Glaucus kill you?

Unfortunately, the answer is yes. Their venom is concentrated and therefore more poisonous than a jellyfish. The good thing is they are rarely seen on the shore. In 2015, there were reports of Glaucus seen on Australian shores. Last year, in 2020 they were spotted on the shores of Texas. People were advised to keep their distance from this small but harmful creature which helped to protect them from unfortunate events.

What do you put on a Blue dragon, or Glaucus Atlanticus, sting?

If you have been stung by a Blue dragon, it is better to seek emergency help and go to a nearby hospital rather than trying to treat it at home. Their sting can produce various symptoms including nausea, vomiting, severe pain, redness, papules and fluid filled blisters. Due to the wide range of systemic symptoms, proper medical help should be taken.

How long does Blue Glaucus live?

Blue dragons have a relatively short life span ranging from few months to 1 year. Glaucus is a hermaphrodite, once they are done mating each partner would lay a string of eggs which are roughly 15 to 20 in number. Usually, eggs are laid on a floating surface, for example, plastic.  Once laid, the eggs hatch in no time as they don’t require any gestational period.

Can you have Blue Glaucus as a pet?

Glaucus is an ocean animal, and they usually don’t survive in captivity. Apart from having fiery sting which can be deadly, they also have specific dietary requirements which include another stingy animal i.e. Jellyfish. Additionally, their mating habits are also not suitable for closed environments. Therefore, they usually die when kept as pets.

Yes, blue dragons are cold-blooded nudibranch (organisms that lose their shells after completing the larval stage). They belong to the phylum Mollusca and class Gastropod (Slugs or snails) Hence their other name is Blue Slug. The organism is shell-less and uses its fins or cerata for movement and protection. They also have scales on their body. 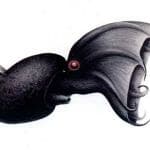 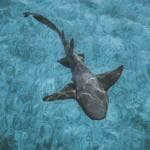