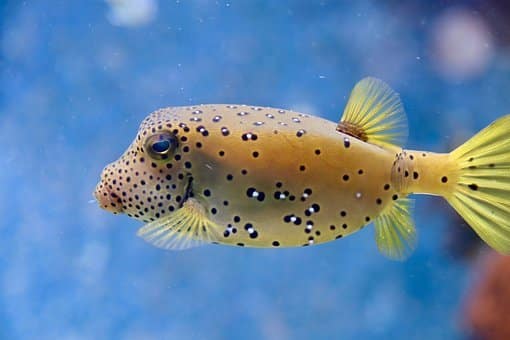 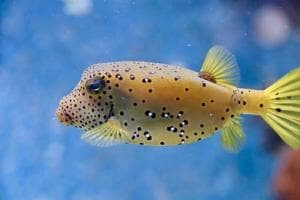 The pufferfish is one species in the Tetraodontidae family and is best-known for its ability to inflate its body or puff up in order to make itself inedible.

Pufferfish is one species in the Tetraodontidae family. The family includes fish of the order Tetradodontiformes. It is also sometimes referred to as a blowfish, globefish, shellfish, bubble fish, or balloonfish.

The pufferfish is best-known for its ability to inflate its body or puff up in order to make itself inedible. They ingest large amounts of water and sometimes air, growing their bodies many times their normal size. In addition to this very creative offensive mechanism, a pufferfish that’s eaten before its able to inflate its body is incredibly toxic.

Pufferfish have long bodies and large, round heads. Some have spines on their skin that make them even harder to eat, while others have bright markings meant to remind other animals that it might be dangerous to consume them. Others still are more monotone, allowing them to blend into their environments.

Pufferfish range in size from one inch to two feet in length. The former is the dwarf pufferfish or pygmy pufferfish, and the latter is the freshwater giant puffer. They’re slow, un-graceful swimmers but can use bursts of speed to evade predators. Pufferfish are often compared to porcupinefish. The latter has large external spines and is slow-moving, like the pufferfish.

Both species use a combination of fin motions to move, including pectoral and caudal. They’re quite maneuverable but also easy for predators to catch up to. Pufferfish have excellent eyesight and the ability to move their eyes independently, which is often helpful when trying to outmaneuver predators. Some species are also able to change their patterns or the intensity of their colors depending on the environment and if they feel they’re in danger. Their color and unusual ability to inflate their bodies have made them one of the best-loved marine creatures and an often sought after pet.

There are more than 120 species of pufferfish found worldwide. The majority of them are concentrated in tropical and subtropical ocean waters. There are some species that can live in brackish waters or water that is a mix of salt and freshwater, as well as those that can live purely in freshwater. Thirty-five species spend their entire lives in freshwater. These are mostly located in regions of South American, Southeast Asia, and Africa.

Pufferfish have four fused teeth that look resemble a beak. Their diet mainly consists of invertebrates, or animals without backbones (mollusks, annelid, arthropod, and more), as well as algae. They’re capable of opening mussels and shellfish their four-toothed beaks, according to National Geographic. They can also survive on a totally vegetarian diet if they need to, but they are more comfortable eating a combination of plants and smaller creatures.

Pufferfish reproduce when the males push the females to the ocean’s surface. Eggs hatch after around four days and are too small to see with the naked eye. If viewed through a microscope, it’s clear that their bodies are tapered, though, just like their parent’s. In freshwater, reproduction is more variable. Males court females, and then the latter chooses a place to release her eggs for fertilization. Male pufferfish have been observed rubbing against the female’s side, presumably helping her.

Aside from their ability to inflate their bodies, pufferfish are best-known for their toxin. Their bodies contain tetrodotoxin, a terrible tasting, and usually fatal substance. There are some animals, like sharks, that can eat puffers without falling ill. Sharks are one of the only species immune to the toxin puffer fish produce. Sea snakes are another natural predator, especially in the warm waters of the pacific. One quite interesting example of animals successfully eating pufferfish comes from dolphins who have been documented with pufferfish, trying to get intoxicated off contract with the animal. When successful, they enter a trance-like state. However, there are some who are skeptical of this once celebrated and well-known study.

Within the pufferfish, the poison is mainly found in the ovaries and liver. But, there is also some in the intestines, muscle, and skin. Interestingly, there are some puffers that aren’t as toxic. For example, the northern puffer is a delicacy in North America and is far less dangerous than its relatives elsewhere in the world.

Currently, scientists believe that pufferfish get their toxin from the food chain, specifically from the tetrodotoxin-producing bacteria that they consume. Studies have shown that pufferfish bred outside of these waters do not develop the ability to produce the toxin.

They are not the only animal that uses this specific toxin, it’s also found in dart frogs and the blue-ringed octopus.

The poison is almost always deadly for humans. National Geographic states that the poison is 1,200 times more deadly than cyanide and that one pufferfish contains enough toxin to kill thirty adult men. There is no known antidote to the poison. Effects include tingling of the lips and mouth, limb paralysis, respiratory failure, and death.

Despite the danger of eating pufferfish, people still do it. In fact, in some countries, the poisonous parts of the pufferfish are considered a delicacy. People die every year from improperly prepared “fugu.”

While pufferfish aren’t as endangered as some marine species like the whale, they are threatened due to common human-caused circumstances—for example, habitat loss and pollution. The latter is especially important due to the pufferfish’s dependence on alage as a main source of food. Overfishing and by-catch are also a threat.

Pufferfish as a Pet

Puffers are often sold at common pet stores for any fish aficionado to purchase. In captivity, they eat chopped squid, clams, shrimp, and krill, along with other meat-based food stuffs. It’s possible that one’s pet puffer might eat other smaller fish in the aquarium, something that should always be taken into consideration before purchasing one.

Perhaps the most important things to remember before purchasing a pufferfish as a pet is that its necessary they have an appropriate sized aquarium, hiding places, and plenty of room to move around. The water must also be of a suitable quality. It should be between 72-78°F with a salinity level of 1.020-1.025. Their lifespan ranges but if properly cared for the fish could live around ten years. 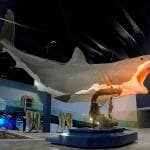