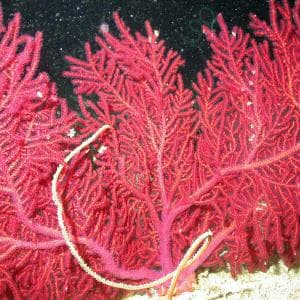 The red sea whip is important in the coral ecosystem and one of the most common structures in the Atlantic reefs.

The red sea whip, or the Leptogorgia virgulata, is found mainly in the Atlantic Ocean. This interesting soft coral species is part of the octocorals, or Gorgoniidae, family. The red sea whip is an important factor in the coral ecosystem as it houses quite a few different creatures. Although they are passive feeders, they are still carnivorous beings.

The red sea whip is known for its whip-like stems or tentacles. As octocorals, they possess eight tentacles. These have nematocysts, a toxic stinging ability that allows them to defend against predators and paralyze their prey.

The typical height of a red sea whip specimen is about 20 cm and can reach up to 60 cm to 1 meter in adulthood. They typically grow in an upright structure.

A key variation from normal coral is the structure of its skeleton. A lot of corals have a calcium carbonate skeleton. However, the red sea whip has an internal axial skeleton.

The red sea whip coral typically grows on rocky surfaces in the Atlantic Ocean. They operate most efficiently at around 20 meters depth or 66 feet. They are most often found on shallow rock and tidal creeks.

Although not threatened, the habitat of the sea whip coral is under threat from overfishing. Trawler nets and pollution are having a sustained impact on coral reefs worldwide.

The red sea whip coral, like other whip corals, is a suspension feeder. This means that they are passive in nature, allowing plankton and other nutritious particles to get caught up in their whip-like stalks. The feeding part of their anatomy is the polyps, this line the tentacles and suck in passing plankton and food sources.

Many coral-based lifeforms can live up to 5000 years. This makes them some of the longest-living organisms on earth. From the larval stage, it can take the whip coral up to 20 years to reach its fully-grown state.

The red sea whip coral is gonochoristic, following the typical two-sex system. Their fertilization method is an external one. Eggs and sperm are released into the water column, which are then fertilized once they come into contact.

The larval stage then begins, which can last for 3-20 days. They float around until a suitable surface, or rocky substrate is found to settle on. Once this stage begins, the chances of survival are pretty slim. However, those that do survive blossom into healthy colonies.

The main threat to the red sea whip coral and other corals, in general, are habitat loss and pollution. This is due to human activity and intervention. However, the red sea whip is not currently listed on the IUCN conservation list and is not under threat.

Although they do not have many predatory threats, they are somewhat of a house for many species. Oyster species, algae, barnacles, and bryozoans are all thought to attempt to attach themselves to the tentacles of the sea whip. However, the red sea whip has developed strategies to deter both predation and unwanted settlers. It releases a chemical that prevents the build-up of larvae on its tissue. This formula has been subject to research for human use.

Facts about the Red Sea Whip

Why is the Red sea whip important?

The red sea whip is important for the reef ecosystem as it acts as an abundant structure from which many species can thrive.

What eats the Red sea whip?

Despite the red sea whip’s toxic defense mechanism, it occasionally falls foul to the predation of nudibranchs and burrfish.

Is sea whip a coral?

The sea whip is certainly a coral species. However, it is different from many species in that it has an internal axial skeleton rather than a calcium carbonate skeleton.

How do sea whips reproduce?

Sea whips reproduce by releasing their respective gametes into the water column. External fertilization then occurs. The larvae then search for a suitable hard surface to grow. 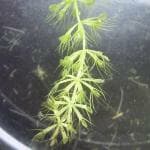 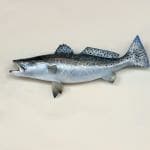