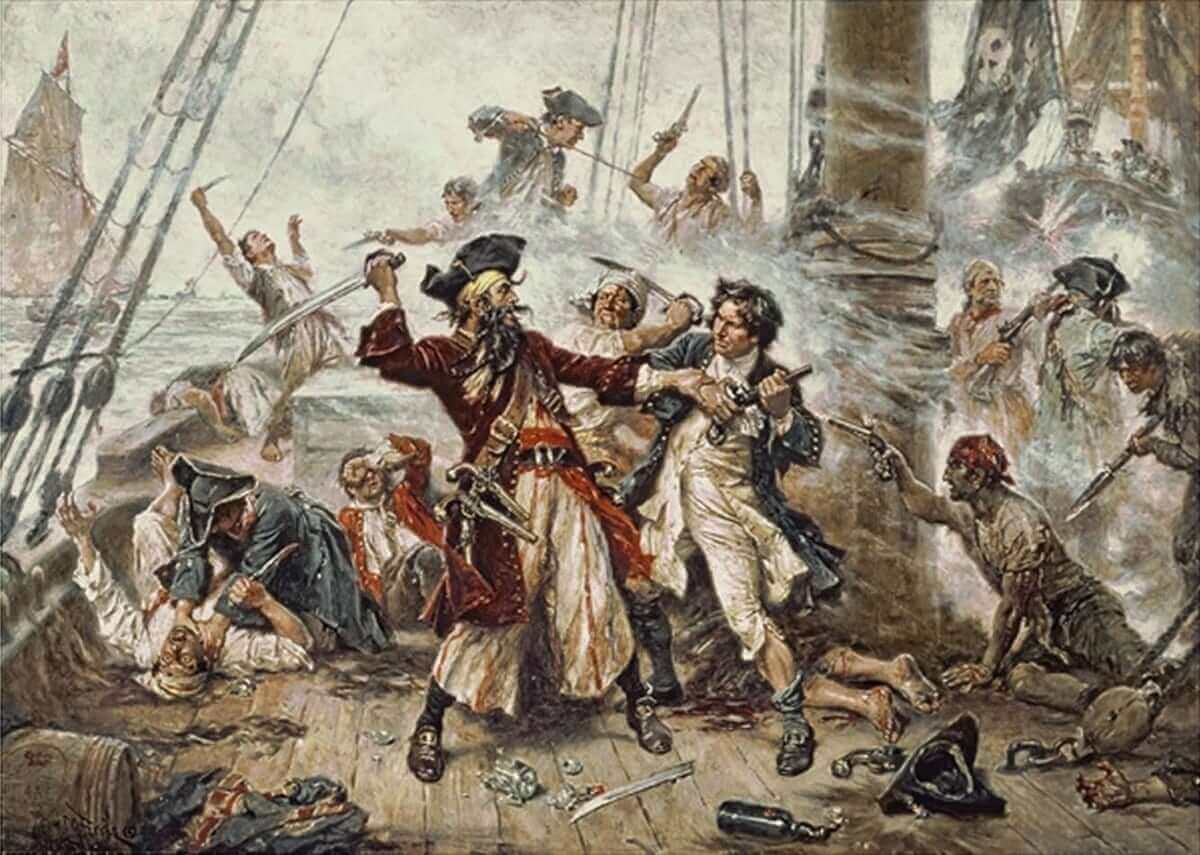 The famous pirates on this list were brutal and intelligent. They lived incredibly dangerous lives that often led to their untimely deaths. Many, such as Blackbeard and Anne Bonny, captured the public’s imagination and have inspired numerous writers, filmmakers, and historians for centuries.

Blackbeard is perhaps the most notorious pirate of all time. He was born Edward Teach in 1680 in Bristol and died in 1718. He operated around the West Indies and the coast of the North American colonies. Starting off as a small-time pirate, it took only a couple of years for his reputation to grow and for his image and name to be known by many.

The road to piracy began after capturing La Concorde, a French slave ship, and converting it into Queen Anne’s Revenge, his first pirate ship. Blackbeard blockaded the South Carolina port of Charles Town, after forming an alliance of pirates. He was killed in 1718 after his ships were attacked by members of the British Royal Navy off the coast of North Carolina.

François L’Olonnais, also known simply as L’Olonnais, or his given name Jean-David Nau, was a French pirate active during the 1660s. He arrived in the Caribbean as an indentured servant prior to his career as a pirate. One of his best-known acts is his attack on Maracaibo (present-day Venezuela) and capture of a Spanish treasure ship. He is said to have taken gemstones, 260,000 Spanish ducats, and other important cargo.

He was also known for his expedition to Honduras, during which he was ambushed by a large force of Spanish soldiers. He narrowly escaped this encounter but was captured by natives in modern-day Panama. A companion describes how these natives tore the pirate to pieces and tossed his limbs into a fire.

Calico Jack, born John Rackam, was an English pirate captain born in 1682 and executed in 1720. He was active from 1718 to 1720 in the West Indies. This was towards the end of the Golden Age. He is known for receiving a pardon for his acts of piracy in 1719 but returning to the sea and continuing to seize vessels. He worked alongside two of the only female pirates in the Caribbean waters, Anne Bonny and Mary Read. It is believed that Captain Calico Jack and Anne Bonny became lovers, resulting in Bonny’s pregnancy. This later allowed her to escape execution.

Anne Bonny was one of the most famous female pirates in history. She was described as dangerous, intelligent, and beautiful. She became a pirate in the early 1700s, joining Calico Jack Rackham’s ship disguised as a man, after marrying James Bonny and moving to Nassau. But, according to legend, when she was discovered, she was spared due to the fact that she was pregnant with the captain’s child. She disappeared at the age of twenty-four.

Captain Samuel Bellamy was an English pirate born in Devon in 1689. He died in 1717 at the age of twenty-eight. He was also known as “Black Sam” Bellamy and is one of the most famous pirates of the Golden Age. This was, despite the fact, that his career as a pirate lasted a little more than a year. During this year, he captured around fifty-three ships, including his notorious Whydah, or Whydah Galley. He considered himself a Robin Hood-like figure.  He is known for a famous speech that begins:

I am sorry they won’t let you have your sloop again, for I scorn to do any one a mischief, when it is not to my advantage; damn the sloop, we must sink her, and she might be of use to you […]

Bellamy is regarded as one of the top-earning pirates of the Golden Age.

Sir Francis Drake is an English pirate, slave trader, and sea captain. Although he is best known for his circumnavigation of the world in a single expedition, he’s also remembered for his acts of piracy. Spain branded him a pirate, known as El Draque. There was even a 20,000 ducat reward on his head (this is equivalent to around US$8 million).

During his famous voyage around the globe, he lost most of his ships, executed subordinates, and raided various Spanish ports. He even seized a Spanish vessel. He was knighted upon his return to England. He was known as “my pirate” by Queen Elizabeth I.

Ching Shih, also known as Zheng Yi Sao, was a Chinese pirate from the South China Sea. She is best known for her acts between 1801 and 1810. She was born in Xinhui, Guangdong, in 1775 and died in 1844 at eighteen sixty-eight or sixty-nine years old. She married at 26 to Zheng Yi and took control of his pirate holdings after his death. At one point, her fleet consisted of 400 ships in between 40,000 and 60,000 pirates. She is known for conflicts she engaged in with the Portuguese Empire and the East India Trading Company. Due to the sheer size of her fleet during her peak, Ching Shih can surely be considered as one of, if not the, most successful pirates of all time.

Captain William Kidd was an infamous Scottish pirate born in 1654 who died in 1701. He was tried and executed in London for murder and piracy. He is best known for the incidents that led to his execution. This included the capture of a French ship. Some have suggested that his reputation as a pirate is overblown, mostly acting as one of the privateers commissioned by the English Crown. Despite this, legends of Captain Kidd’s cruelty remain. Not to mention the many prizes he is said to have attained through his piracy. For example, the 400-ton Quedagh Merchant.

Sir Henry Morgan was born in 1635 and died in 1688. He was a Welsh pirate and plantation owner. He even served as a lieutenant governor of Jamaica. From Port Royale in Jamaica, he raided settlements on the Spanish Main (the parts of the Spanish Empire that were along the coast of the Americas). He is regarded as one of the most important pirates of his age. He is also known for raids on Gibraltar, Panama City, Porto Bello, Puerto Principe, Maracaibo, and more.

Bartholomew Roberts, also known as “Black” Bart Roberts, was born in May 1682 and died in February 1722. He was from Wales and is considered to be the most successful marauder of the Golden Age of Piracy. He is thought to have taken over 400 ships in just a few years, accumulating a fortune. Most of these were off the coast of the Americas and the West African coast. He created his own code and was one of the first to use the skull and crossbones flag. After his lifetime, he became a popular subject for fiction writers who sought to benefit from the public’s interest in the lives of pirates.

Who was the worst pirate in history?

Blackbeard is often cited as the worst pirate in history. He is well known for his willingness to cultivate a terrifying image of himself. This worked to his advantage during his lifetime and has continued long after his death.

Was Jack Sparrow a real pirate?

The character of Jack Sparrow is based on a real-life pirate – John Maude. He was an English man born in 1553 in Kent. He’s best known for raiding the Reniera-e-Soderina.

What was the most famous pirate crew?

Some of the most famous pirate crews from the history of piracy include those who sailed along with Blackbeard, Madame Cheng, and Black Bart. These were large groups of pirates who struck fear into the hearts of thousands.

What was the most feared pirate ship?

Blackbeard’s ‘Queen Anne’s Revenge’ would bring dread and terror to the West Indies seas, exacting a vicious reign of piracy in the early 1700s. Another notable pirate ship was the Whydah, run by Captain Samuel Bellamy. Bellamy went down in history as one of the highest-earning pirates, showing how prolific his ship was.

Who was the world’s most successful pirate?

In terms of sheer numbers of ships taken over during his reign, Bartholomew Roberts, or “Black” Bart Roberts, was the most successful pirate, commandeering over 400 ships. Another name to mention is Ching Shih, or Zheng Yi Sao, who had a fleet of 400 ships and between 40,000 and 60,000 pirates under her command during her heyday in the early 1800s.

What were pirates afraid of?

It is believed that pirates were very superstitious people. Due to the high-risk factor of always being at sea, when bad situations occurred, they would blame it on mermaids and other mystical explanations, due to their fear of the unknown. 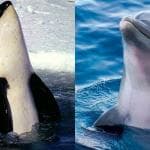 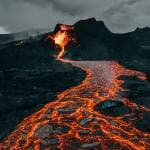