The lanternshark is a species of dogfish shark that is considered to be the smallest shark in the world. There are a few different types of lanternsharks, including the dwarf, smooth, velvet belly, Caribbean, broadband, and combtooth lanternsharks.

Interestingly, the dwarf lanternshark is known in only one world region— the upper continental slopes off Colombia and Venezuela. The shark was first discovered, and cataloged, in 1974 by the U.S. Fish and Wildlife Service while on the research ship Oregon. Its scientific name, Etmopterus perryi, was inspired by Perry W. Gilbert, a noted shark biologist.

Famously, the lanternshark is the smallest species of shark known to scientists (specifically the dwarf lanternshark). They only grow to around 6-8 inches in length. This smallest shark species is identifiable through its long, flathead, and black ventral markings. It has a mid-line dorsal fin.

The dwarf lantenshark, like other members of the genus Etmopterus, is capable of producing light.

The velvet and smooth lanternsharks grow to slightly longer lengths than the dwarf lanternshark, reaching around thirteen to fifteen inches. The fringefin lanternshark reaches a maximum of eleven inches.

The dwarf lanternshark, the most famous of the species, is confined to a small area of the Caribbean Sea. It can be found between Barranquilla and Santa Marta off the coasts of Venezuela and Colombia. It lives in the upper continental slope at depths of up to 1,440 feet.

Lanternsharks, like the fringefin, are known to feed on squid, shrimp, crustaceans, cephalopods, and worms. They are also known to prey on other cartilaginous fish.

Like other little-studied shark species, scientists are not entirely sure about the reproductive habits of lanternsharks. But, they believe that most species reproduce ovoviviparous. This means that they utilize a form of reproduction between egg-laying and live-bearing. They possess embryos that develop inside eggs and then remain in the female shark’s body until they are ready to hatch.

Females gestate between two or three young at a time. Dwarf lanternshark young are around 2.2-2.4 inches or 5.5-6.0 centimeters when they are born while other species are slightly bigger, up to 5.5 inches.

Depending on the species of lanternshark, little or more is known about the threat level that human beings pose. All of these sharks are quite small, meaning that they are of little to no economic value or of interest to fishermen. The IUCN has either not evaluated individual species of lanternshark or determined that the most species are of least concern (like the dwarf lanternshark).

In contrast, the population of velvet belly lanternsharks in the Mediterranean is listed as “near threatened” due to trawling below 3,300 feet. Their reproductive habits, and the fact that they only have two to three young at once, have limited their ability to recover.

Why is it called a lantern shark?

The small species of shark takes its name from the fact that it contains light-producing photophores that allow it to glow underwater.

Lantern sharks, like most of all shark species, are capable of biting. But, the sharks rarely come to the surface and due to their minuscule size, do not pose any threat to human beings.

How big are lantern sharks?

The dwarf lanternshark is the smallest member of the shark species, growing to a maximum of 7.9 inches. Their size also means that they are not of economic interest for fisheries or independent fishermen. Despite this, they are often caught as bycatch when fishermen are seeking out other species of fish.

What is the rarest shark?

There are several very rare sharks in the earth’s oceans. They include the speartooth, angel, oceanic whitetip, great hammerhead, zebra, and basking shark. These sharks have experienced radical declines in their population numbers due to overfishing, trawling, accidental bycatch, and the human-caused effects of climate change. 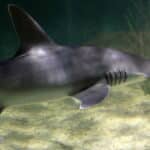