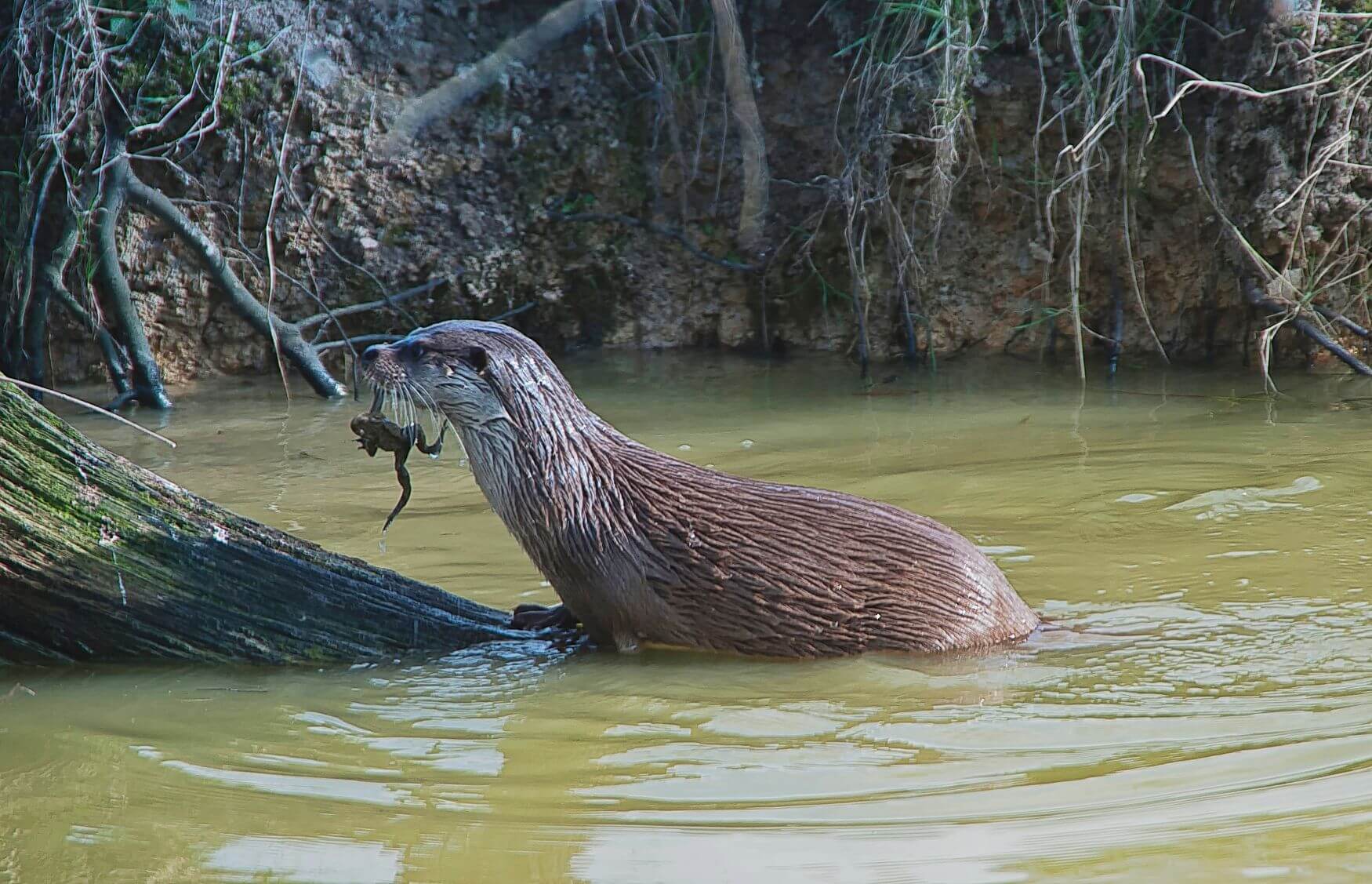 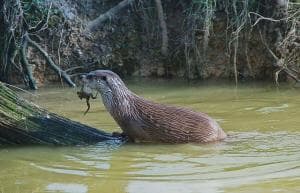 The river otter, or North American river otter, is a species of otter that only lives in North America along waterways and on the coast. These otters are known for their thick coats of fur and their quick, smooth swimming movements.

River otters were first described in 1777 by Johann Christian Daniel von Schreber. There are seven subspecies of American river otter; they are:

They are not necessarily aggressive animals but, like most of the Earth’s creatures, can be aggressive if they feel it’s necessary. Most of the time, otters come across as playful and even sweet, but they do not seek out human companionship and tend to avoid people when possible. This does become difficult at times as human dwellings encroach on rivers and lakes where otters live.

River otters have long whiskers that serve an important function— helping them sense movement around them and enhance their senses overall.

They also have 36 teeth, including canines, that they use effectively when hunting. The North American river otter also has large molars that help the otters crush the shells of mollusks, among other prey, and small webbed feet.

River otters prefer to live in areas with vegetation, rocks, and sufficient cover in order to make their dens. River otters are found throughout North America, including everywhere from Canada and Alaska to the southern United States. They live in lakes, ponds, rivers, and other waterways. It’s also not uncommon to find them along the coast. The only areas that river otters tend to avoid are arid and treeless.

They are mostly solitary creatures, except for a female otter who has just had young. Otherwise, they only come together in the mating season.

River otters are known for building dens or burrows. These are usually under logs or on the river bank. They usually have underwater entrances as well as a tunnel to help protect the nesting area. Inside these dens, one could find grass, leaves, bark, and more. It’s also common to find dens under trees or within burrows that other animals, like beavers, forged.

River otters consist primarily of a diet of fish and other small marine creatures. This includes turtles, insects, frogs, and some mammals (birds, rabbits, and rodents). They’ve also been known to hunt snakes for food. Amazingly, they can travel up to 18 miles from home while searching for food.

River otters mate in late winter/early spring, often between March and April. Their mating process usually takes place on water but can occur o land as well. Otters have a gestation period of between 9.5 and 12.5 months and give birth to 1-6 pups per litter. Usually, it is 2 or 3 young at a time.

River otters can live up to 12 years old after reaching sexual maturity between 2 and 3 years old. Incredibly, the oldest living river otter on record lived to be 27 years old.

There are a few key differences between these two otter species. Both are found in fresh and salt water, but sea otters are up to 3 times larger than river otters. They are known for floating on their backs, while river otters prefer to swim on their bellies. The sea otter has a shorter tail than the river otter and one that is less pointed.

River otters are narrower than the broader sea otter but have smaller feet and overall body mass.

Can river otters live in the ocean?

River otters prefer to stay in rivers, but they can roam along the coasts of some oceans, near rivers, such as the Pacific and Atlantic coasts. In terms of the open and deep ocean, they stay away from, for a lack of food and threat from predators.

How intelligent are otters?

Otters are one of the smartest animals on the planet. They are well-known for using tools, like rocks, to open clams. They can also be taught random skills like stacking cups and even playing with sports balls.

No, river otters are not endangered. The IUCN ranks them as of “least concern.” But, they are still affected by habitat loss and illegal hunting. This is particularly true of the giant river otter.

It is possible to be bit by a river otter but very rare. They are not aggressive animals by nature, but if they feel threatened, they will fight back.

Are river otters friendly to humans?

No, river otters are not friendly to humans. They are often seen around lakes and rivers near neighborhoods but do not want to interact with human beings. They try to avoid people if possible.

Can you own an otter as a pet?

There are only a few states in the US where owning a river otter as a pet is legal. But, you still need a very specific permit. Owning river otters is widely illegal throughout the country. 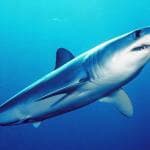 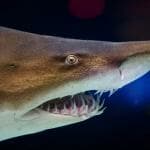