The basking shark and great white shark are two very different animals. Both prowl the Earth’s oceans but one is smaller and predatory while the other is larger and a filter feeder.

The basking shark is far larger than the great white shark. It is also one of the only sharks that feed on zooplankton (filter-feeding). The great white shark, on the other hand, is predatory. This means that it stalks and hunts its prey. The main components of their diet include seals, sea lions, other sharks, and small whales.

The Main Differences Between a Basking Shark and Great White Shark

We’ll explore these differences and interesting facts about each shark more below.

The basking shark is a very large shark, second only to the whale shark, making it the second largest fish on the planet. The shark is the only living member of the Cetorhinidae family.  They are solitary animals, spending most of their time alone unless they are congregating around a particularly large patch of zooplankton.
The shark’s name comes from its habit of swimming to the surface of the ocean and basking in the sun’s heat.

The shark is incredibly large, reaching lengths of twenty-six feet (still considerably smaller than the whale shark). Much larger than the great white shark, which grows to between 15-16 ft or 5.6-4.9 meters. The basking shark is usually grey-brown in color with mottled skin and notches all over its body. It also has a distinctive large mouth that sets it apart from other sharks. It has evolved to make it a better filter feeder. As noted below, it is one of the only sharks that feed this way (quite different from the great white shark).

The shark also has a very distinct caudal fin and an unusual-looking snout that make the shark quite easy to recognize. Although, as the second-largest shark species, it can sometimes be an intimidating creature to spot from the surface of the water.

The sharks have around 100 teeth per row in their mouths but, they are filter feeders. This means that it opens its mouth and strains its food through a filtering structure. The basking shark feeds on zooplankton, small fish, and invertebrates in the water. It uses its gill rakers when it swims forward and opens its mouth. The large gill slits allow the shark to trap many small organisms. The basking shark is only one of three sharks that feed in this manner.

The basking shark is found around the world in temperate waters. These sharks move thousands of kilometers during the various months of the year as they seek out the largest patches of plankton. They’ve been seen around Massachusetts, the Amazon River, the Mediterranean Sea, and other varied areas of the Earth’s oceans.
Interestingly, during the colder months, they usually move down to deeper depths, around 3,000 feet or 900 meters. Basking sharks have few predators; their remains are sometimes scavenged by other sharks.

The great white shark is one of the Earth’s oceans’ most famous creatures. The shark has been portrayed in a variety of films and television shows, often enhancing their aggressive tendencies and suggesting that human beings should be terrified of them. Despite being seen as one of the animal kingdom’s apex predators, these sharks are far more nuanced and far from the predators that they have been made out to be.

The great white shark is one of the easiest sharks to recognize. Not exactly due to its distinguishing features but because of the number of films and television shows that the creature has featured in. They are the world’s largest predatory fish, weighing in at 1,151–1,700 lb (522–771 kg). The females are usually larger, sometimes reaching 2,450 lb or 1,110kg. They are also between 15-16ft or 5.6-4.9 meters.

Some suggest that the great white shark is the scariest looking shark in the Earth’s oceans today. The sharks have a conical snout and large fins and are usually very bulky-looking. Their tails are crescent-shaped, and their bellies are white. The latter is known as countershading.
Countershading is a coloration that many sea creatures sport. It allows them to blend in, from the bottom, with the bright sun coming through the ocean’s surface, and to blend in, from the top, with the dark water in the ocean’s depths.

The great white shark is the world’s largest predatory shark. It feeds on everything from other sharks, seals, and sea lions to fish. They sometimes prey on sea turtles and even small whales. They are also not put off my heavily boned carcasses. For example, the oceanic sunfish, one of the heaviest species of boned fish, has been known to be eaten. Despite public opinion, human beings are not a part of the shark’s diet.

When hunting, they reuse the prey, attempting to surprise it before it knows the shark is there. The initial bite is so strong that sometimes, the prey flies out of the water and into the air, according to Britannica.

The great white shark lives in almost all coastal waters. They prefer temperatures between 54 and 75 degrees F and 12 and 24 degrees C. Meaning they can adapt to both temperate and tropical waters. The largest populations are around the Northeast United States and California, Japan, Oceania, Chile, and South Africa. Despite being present in many waters, such as the pacific ocean and Atlantic oceans, there have been cases of overfishing impacting the great white population. For example, off the coast of New England, the populations were nearly driven to extinction due to human intervention. However, due to the rapid rise of seal populations in Cape Cod, on the same coast, the number of great whites has increased.

How can you tell the difference between a great white shark and a basking shark?

The great white shark has a far more distinctive color scheme. The dark and light sections of their bodies are far more obvious than on a basking shark. The latter has a large mouth and a distinctive conical snout.

Is a basking shark bigger than a great white?

Yes, the basking shark is the second-largest shark in the Earth’s oceans. It grows to around twenty-six feet, whereas the great white grows to about sixteen feet in length.

Is a basking shark a predator or the prey?

The basking shark is a filter-feeding animal, collecting a wide variety of plankton and small fish, technically making it a predatory carnivore. However, other sharks like the great white are more traditional active apex predators. 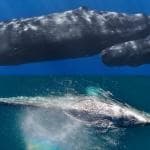 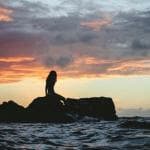