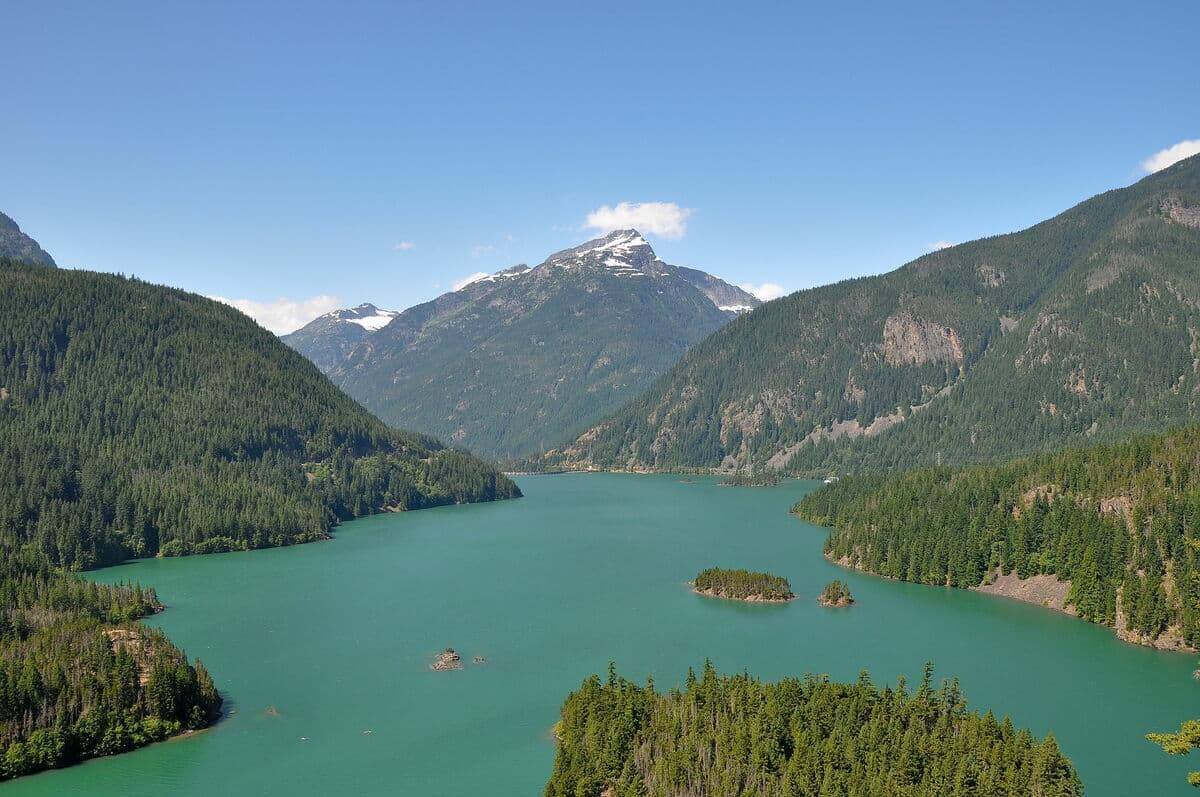 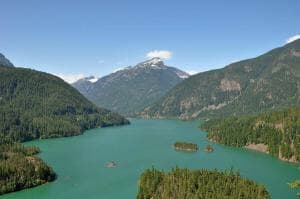 Diablo Lake is a famous reservoir lake in the North Cascades mountain range in Washington State. It resulted from the creation of the Diablo Dam.

The lake is located along the Skagit River, not far from the equally well-known Ross Lake, and sits at an elevation of 1,201 feet above sea level. Situated in the North Cascades National Park, the lake is home to various fish species, including rainbow and cutthroat trout. The lake is also one of three, including Ross Lake and Gorge Lake, which provides electricity to the largest city in Washington State— Seattle.

Visitors might also find themselves interested in hiking the Diablo Lake Trail. This trail provides hikers with a 7.6-mile round trip experience that gains 1,400 feet in elevation (reaching a maximum of 1,950 feet above sea level). Along the way to the trailhead, visitors can get views of numerous minor North Cascades peaks, including Davis Peaks, Pyramid, and Jack Mountain.

Of all of Diablo Lake’s many intriguing characteristics, its turquoise green color is the most common reason that visitors find themselves pulling off of Highway 20 and taking the time to snap a few photos or walk along the trails of Diablo Lake. According to the National Park Service, its color results from suspended rock particles, known as glacial flour, refracting sunlight. As the rock in the surrounding mountains is eroded, it makes its way into the Skagit River and its lakes below.

The Diablo Dam is a large spillway that opened in 1930. It created the often-visited Diablo Lake. It reaches a height of 389 feet and runs for over 1,100 feet in length. It is located in Diablo Canyon along the upper part of the Skagit River in Whatcom County. When it was completed, it was the tallest dam in the world. The water from the dam creates hydroelectric power, creating 689,400,000 KWh annually.

From the top of the dam, which is also a tourist attraction, visitors can look down at Diablo Lake and the surrounding peaks and hills.

The Skagit River is a well-known river that runs through southwestern British Columbia and northwestern Washington. The river’s watershed varies in temperature, ranging from −6 °F (−21 °C) to a high of 109 °F (43 °C). Along the river are Ross Lake, Diablo Lake, and Gorge Lake, as well as the dams responsible for creating these often-visited recreational areas.

The Skagit River is an incredibly important breeding ground for salmon and a home for trout. It is unique in the fact that it contains five native salmon species: chinook, coho, chum, sockeye, and pink.

Also of note, the river plays host to a large winter bald eagle population, one of the largest in the United States. At peak times, between 600 to 800 bald eagles find their way to the river to hunt for salmon. This is yet another reason visitors might find their way to Diablo Lake and its surrounding vistas.

Visitors often cite Diablo Lake’s fishing opportunities, its distinctive turquoise color, and its incredible setting within Washington’s North Cascades as the main reasons why the lake is such a special place to visit. Additionally, it is very easily accessible off of the North Cascades Highway, or Highway 20.

Within the creeks and brooks of Diablo Lake live many fish species. The most common species that have been seen in the glacial streams are the rainbow trout and bull trout. This makes the lake great for fishermen. As the lake is surrounded by the North Cascades National Park, mammals such as Bears, Wolves, and Lynx frequent the areas around the lake.

What can I do at Diablo Lake?

Diablo Lake is a popular destination for outdoor enthusiasts. Visitors can swim, fish, canoe, kayak, spend time on the beach admiring the mountain surroundings, and more. It’s also possible to hike along the Diablo Lake Trail, where you can glimpse some minor North Cascade peaks, like Pyramid.

Why is the water so blue in Diablo Lake?

According to the NPS, the water in Diablo Lake gets a distinctive color from suspended glacial flour. These rocky particles make their way into the lake’s water as ice and snowmelt erode rock on the surrounding mountains.

How many hours is the Diablo Lake trail?

The amount of time it will take you to hike the Diablo Lake trail varies. But, on average, it takes a hiker of moderate fitness around 3.5 hours to complete the 7.6-mile hike.

The water in Diablo Lake comes from the Skagit River. But, it is not exempt from glacial flow from the surrounding peaks.

Whether or not this trail is “hard” will be up to individual visitors. But, most hikers cite the 7.6-mile hike as “moderate.” Visitors will gain around 1,300 feet of elevation over around 3.8 miles.

Can you swim in Diablo Lake?

If you can gain easy access to the lake, swimming is fully permitted and one of the recommended activities. Although the glacial water is very cold, it is suitable for swimming. 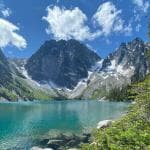 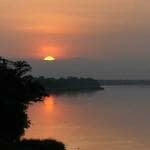