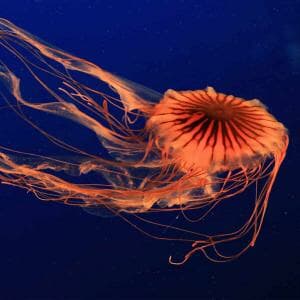 The sea nettle is a worldwide type of carnivorous jellyfish known for its unique and beautiful appearance.

The sea nettle is a jellyfish found in the genus Chrysaora, and of the family Pelagiidae. There are various species of sea nettle jellyfish throughout the world, but they are all similar in some ways but vary slightly in others.

C. fuscescens‘s main section, or the bell, is mostly around 50 cm in diameter; however, they can grow up to 1 meter. Their tentacles have more room for growth as they can hit up to 15 feet. C. quinquecirrha is a smaller jelly, with its bell growing up to 40 cm.

Sea nettles have a broad diet as their hunting style is of a passive nature. This makes them accept a wider spectrum of prey. They are predators and carnivorous creatures. Small crustaceans, sea snails, zooplankton, small fish, fish eggs, larval fishes, other larvae, and even other jellyfish, are all on the menu.

Their hunting style consists of them leaving their tentacles hanging down in the water. These tentacles contain cnidocysts or stings that can paralyze their prey with their toxins. Once a creature is caught up in its tentacle web, the oral arms bring the prey to the mouth. The tentacles also digest the animal en route to the mouth.

The life cycle, and reproductive cycle, of the sea nettle jellyfish, are very complex and dynamic. They can reproduce during multiple stages of their lifespan. For example, in their adult state, or medusa stage, the female will carry her eggs in her mouth until she captures the male’s sperm. This then fertilizes the eggs. The fertilized eggs continue to develop until they become polyps. They resemble flowers and get pushed out from the female into the open ocean.

They are also capable of asexual reproduction in their polyp stage once they anchor themselves to a solid surface. The polyps multiply themselves in identical forms with budding and are released once fully formed. They then grow as they swim.

Although climate change, and a shift in environmental conditions, are generally a threat to the majority of oceanic species, it seems to be having the opposite effect on the sea nettle. An overabundance of these jellies has been reported off the coast of Oregon. This is believed to be having a negative effect on the fish population as they are feeding on more and more fish as the numbers grow. Due to this population growth, it is hard to consider their conservation status as under threat.

Sea nettles do provide a level of threat to the human body if the situation arises. Normally, their toxic tentacles are not enough to be considered lethal. However, if a person was to be allergic to jellyfish stings, it could cause some serious issues and complications.

Facts about the Sea Nettle

Yes, sea nettles possess toxins called cnidocytes, which are lethal to their smaller prey and can stop predators in their tracks. They can cause issues with humans but are rarely lethal.

No, in fact, the population of sea nettles is increasing. Due to this, they have not even been evaluated for the IUCN list.

Where are sea nettle found?

What class is the sea nettle in?

The sea nettle is in the class Scyphozoa, order Semaeostomeae, family Pelagiidea, and genus Chrysaora. 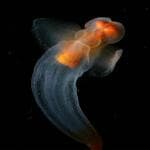 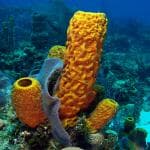