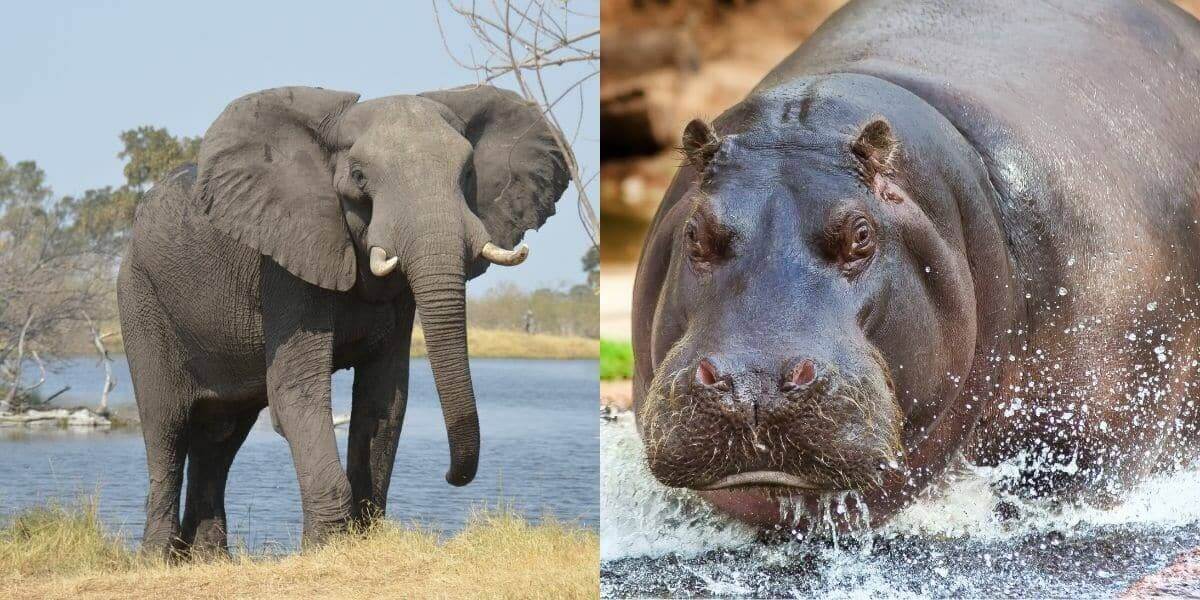 Both the elephant and hippo are found primarily in Africa, feed on grasses and other plants, and spend time around other members of their species. But, there are some significant differences readers can explore below.

Elephants are well-known for their matriarchal, tightly-knit groups that depend on a hierarchical social structure as well as for their incredible intelligence. Scientists have ranked elephants as comparable to dolphins regarding problem-solving, memory, and more.

Hippos also live in groups, of up to thirty members, but they follow a more common patriarchal order. The dominant male has the right to mate with any of the female hippos in the group.

Main Differences Between an Elephant and a Hippo

Here are the top five main differences between an elephant and a hippo:

Elephants are a keystone species within the Earth’s ecosystems. They are also the largest land mammal on the planet. They are well-known for their incredible tusks, trunks, and intelligence.

Currently, there are three living species of elephant:

Elephants are related to mammoths and straight-tusked elephants, two extinct members of the family Elephantidae.

As noted above, elephants are the largest land animal currently living on Earth. Of the three elephant species, the African bush elephant is the largest. Males are between ten and eleven feet tall and weigh between 5.7 and 7.6 tons. Females of the same species grow up to nine feet in height and weigh four tons.

Asian elephants are slightly smaller, with males growing to around nine feet tall and weighing five tons. Females can be eight feet in height and weigh up to 3.4 tons. The smallest species is the African forest elephant. They reach heights of seven feet seven inches and weigh around 2.5 tons.

Elephants have tough, grey to brown skin when they’re fully grown. The three species can vary slightly regarding the exact pigmentation of their skin. But, the Asian elephant is considered to have more hair coverage than the African elephant. Often, elephants are seen covered in mud. This is a technique that they use in order to protect their skin from sun damage, insect bites, and loss of moisture.

Elephants are also well-known for their large tusks. They are modified second incisors that they develop from a young age. They are used for digging, fighting, marking trees, and more. They are an integral part of the elephant’s body and are, unfortunately, often a target of poachers. Read more about the current conservation status of elephants below.

The elephant’s truck is part-nose and part-upper lip. The trunk is an incredibly useful appendage that the elephant can use to touch other elephants, pick up objects, breathe, and smell. They’re thought to have an incredible sense of smell, up to four times as powerful as the most skilled dog species.

Elephants have a wide variety of habitats they prefer. They can be found in deserts, marshes, lakeshores, and high and low elevations. Commonly, African elephants live in savannahs and Asian elephants in the scrub forests.

When feeding, elephants are non-confrontational. This means that they can feed alongside other herbivores peacefully.

Elephants’ natural predators are few and far between, especially when it comes to the African bush elephant. They are so large that as many as thirty lions have been documented attempting to bring a single juvenile male down. The smallest elephant calves are far easier prey. The young are at threat from hyenas, lions, wild dogs, and in Asia, tigers.

In 2021, African bush elephants and African forest elephants had their statuses updated by the IUCN. The latter was listed as Critically Endangered and the former as Endangered. Between 1979 and 1989, elephant populations dropped from between 1.3 and 3 million to around 600,000. The population of elephants in East Africa declined a remarkable 74% in this same period.

Some optimistic studies have appeared throughout recent years suggesting some resurgence in elephant populations in Africa. But, the IUCN estimates that throughout the entirety of Africa, there are around 415,000 individuals. Today, elephants are protected in nearly every country they reside in. But, much of their range extends beyond the areas that counties have deemed as sanctuaries. Illegal poaching in protected areas is also an issue. There are some countries in Africa, such as Botswana, Cameroon, South Africa, Mozambique, Namibia, and Zimbabwe, where the practice of sport hunting elephants is still legal.

In 2020 in Asia, the IUCN added Asian elephants to their list as Endangered. They cite a troubling statistic that nearly 50% of the population has declined in recent generations. There are believed to be between 40-50,000 Asian elephants left. But, some hopeful studies suggest that populations are increasing in protected areas.

Elephants are still hunted, despite many protected areas throughout Asia and Africa, for their tusks, skin, and meat. Throughout history, various cultures have utilized parts of elephants in rituals and everyday life. Today, the majority of the poaching happens with the intention of removing an elephant’s tusks and selling the highly valuable ivory.

Elephants also face threats from habitat encroachment and destruction and the effects of climate change, like drought.

The hippopotamus, commonly known as the hippo, is a large mammal native to sub-Saharan Africa. It is semi-aquatic, meaning that, unlike its African counterpart, the elephant, it lives part of its life in the water. They are also well-known for their incredible and sometimes intimidating speed. They can reach up to 19 mph (30 km/h) over short distances.

Hippos are the third-largest land mammal after the elephant and the rhinoceros. There are only two living members of the family, Hippopotamidae. They are:

The hippo’s closest living relative is not, in fact, the elephant or rhinoceros, nor is it the pig (despite the visual resemblance). They are most closely related to whales and dolphins.

Their bodies are commonly described as barrel-shaped. They also have short tails, long muzzles, and dense bones. Their low center of gravity allows them to move easily along the bottom of the water, an attribute that other megafauna species, like the elephant, do not share. Their adeptness in the water is furthered through their unusual, webbed feet. They are not known to be particularly good swimmers (nor can they float due to their low center of gravity).

The hippo is known as a megaherbivore. This means that, like elephants, it is an exceptionally large land mammal that eats plants.

When in water, the hippo generally prefers to stay where it can easily remain at the surface or reach land quickly. This is due to their low swimming ability. They can spend up to five minutes underwater before surfacing to breathe.

In the wild, their diet consists almost entirely of grass. They can eat up to 88 lb (40 kg) of grass in a night before returning to the water in the morning. There have been a few rare occasions in which hippos have been observed eating carrion or already dead animals.

Like elephants, they have a significant impact on the areas in which they live and feed. This is due to their immense size and the large amount of grass they consume on a daily basis.

Like elephants, there are few natural predators hippos have to be concerned about. Far more dangerous are their interactions with humans and the effects of climate change. Habitat destruction and encroachment constantly threaten hippos’ natural range.

Sadly, hippopotamuses also face poaching and legal hunting practices that have resulted in a steep delicate in their population numbers. With bans on elephant hunting becoming more prevalent, some hunters have turned to hippos and their ivory canine teeth as an alternative.

In other cases, hippos are pushed out of their habitats by new settlements and roads, leading to further population decline.

Which is deadlier, an elephant or a hippo?

Of the two, the elephant is far more dangerous despite the hippo’s reputation. Elephants are larger, growing up to eleven feet in height, and have tusks that, if threatened, they can use to fight.

Can anything beat an elephant?

Lions are the only predator capable of killing an elephant. But, it takes a large pride of lions to complete the job. Even then, lions usually focus their efforts on juveniles.

What animal can beat a hippo?

If put head to head in a fight, several other animals like lions, crocodiles, and other hippos can defeat a hippopotamus. If they did fight, elephants would certainly be capable of beating a hippo.

Can a tiger kill an elephant?

Alone, a tiger could possibly kill a juvenile Asian elephant. But, elephants are so much larger than any of their surrounding predators that it is unlikely.

Crocodiles are known to eat hippo calves. But, full-grown, adult hippos are too large and too dangerous for crocodiles to prey on. 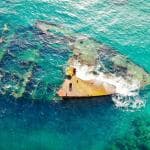 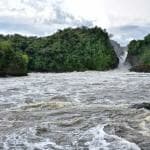