If you’ve ever visited the ocean or the seaside and wondered why the water was glowing, you’ve experienced a phenomenon termed bioluminescence. Bioluminescence occurs in countries across the world and specifically occurs in living organisms.

Bioluminescence is the reaction between luciferase and luciferin. Luciferin combines with luciferase, and both of them react with oxygen to form a complex, and a photon is then emitted from luciferin.

When Chemo luminescence occurs in living organisms, it is termed Bioluminescence.

What is the molecular chemistry behind it?

Luciferins and photoprotein chromophores are responsible for Bioluminescence. In some species, both are equally significant, while in others, one predominates the other.

In Aequorea aequorea, the photoprotein aequorin reacts with calcium either in the presence or absence of molecular oxygen, which results in the production of blue light.

In anthozoan Renilla, an unstable luciferin (IIIb) reacts with molecular oxygen in the presence of luciferase, resulting in the production of light.

What colors are emitted?

The spectral range of this phenomenon spans approximately 400-700nm. The red light of the visible spectrum of light is absorbed before reaching the deep end of the ocean, and hence most of the light emitted is blue and green. However, some species emit red and infrared light, and one genus even emits yellow color.

When can you see bioluminescence?

Only at night can you see the glitter since it changes with the circadian rhythm. At dawn, the molecules are broken down, and at dusk, they begin to be rebuilt. The physiological state of the cell, the surrounding environment, and the amount of light absorbed the day before all have an impact on the intensity of the light that is released. This final occurrence occurs because the process of bioluminescence in species containing chlorophyll (like the green genus of Noctiluca scintillans) is slightly different and is dependent on the chlorophyll molecule. Cell sensitivity to stimulation, particular response, timing, physiology, and environmental factors all have an impact on this phenomena.

What Animals can emit Bioluminescence?

The organism responsible for this in places like the ‘sea of stars’ is plankton.

Noctiluca scintillans is a marine species of dinoflagellate and is also responsible for sparkling waters.

However, planktons aren’t the only organisms responsible for it. Marine animals such as fish and invertebrates also are a cause of bioluminescence. Bioluminescent Octopus is another organism emitting this phenomenon.

Why does Bioluminescence occur?

There are five known functions:

In a deep-sea fish that emits red color, it helps them red light helps it to see red pigment in its prey.

Can these organisms be a cause of something dangerous?

The blooms of Noctiluca scintillans can be an indicator of anthropogenic eutrophication and can also be responsible for toxic red tides.

How is bioluminescence used in medicine?

It is also used in highly sensitive cellular assays.

It is also used to visualize physiological processes in animals and is used to study the metabolic syndrome.

An experiment attempted to track the SIV cells in macaques using bioluminescent technology. The study found out that Th17 cells are preferentially infected, and this opens up new opportunities for protecting these cells in an HIV infection.

In what parts of the world can bioluminescence be seen?

Bioluminescence can be seen in various countries around the world. Maldives, Brazil, and Saudi Arabia are a few countries that experience this phenomenon.

Can organisms be genetically modified to produce bioluminescence?

Yes, organisms such as fish can be genetically modified to produce bioluminescence. Glofish is a patented and trademarked brand of genetically engineered fluorescent fish. Bioluminescent fish are a popular pet option.

What are the concerns due to genetically modified bioluminescent fishes?

There are concerns that the genetically modified fish in the wild may take over the native fishes found in such places leading to concerns about the destruction of native fauna.

Are there any land organisms that produce bioluminescence?

Fireflies and mushrooms are land organisms that produce this phenomenon. 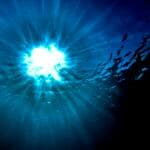 Why Is the Ocean Blue? 4 Things Affecting the Ocean’s Color