While there are many differences between orcas, or killer whales, and great white sharks, there are some very interesting ways they are similar. Below, readers can explore a few of these and learn more about the complex, incredible lives these two species of marine animals live.

Main Differences Between the Great White Shark and Orca

Here are the top five main differences between the great white shark and the orca:

What is a Great White Shark?

Great white sharks are a large species of mackerel shark. They can be found in oceans around the world. The largest individuals have been documented as up to 30 feet in length and up to 5,000 pounds, but most are smaller. Great white sharks have no known natural predators except for the orca. This large whale has been known to prey on sharks of various sizes. Historical evidence even indicates that orcas may have played a role in driving the megalodon to extinction.

Great white sharks are the largest predatory fish, weighing in at 1,151–1,700 lb (522–771 kg). The females are usually larger, sometimes reaching 2,450 lb or 1,110kg. They are also between 15-16ft or 5.6-4.9 meters. They are usually quite bulky-looking and have sometimes been cited as the scariest-looking shark. They have a conical snout and large fins.

These sharks live in the waters of all major oceans. They prefer temperates between 12 and 24 °C (54 and 75 °F). The majority live around the coasts of the United States (in the northeast and west), Japan, Chile, Oceania, and South Africa. The latter is host to one of the largest populations of great white sharks around Dyer Island.

Many of these populations are threatened, such as that in the northeastern area of the United States. The sharks were nearly driven to extinction in this area due to over-fishing. But, populations have rebounded to a degree in the area.

Great white sharks are incredibly adept hunters. They can move at a speed of up to 21 mph or 33 kph and have an impressive row of around 300 serrated teeth. Like orcas, they have strong jaws and incredibly biting power. As films like Jaws would have one believe, great white sharks don’t prey on human beings. They generally eat sea lions, fish, and sometimes smaller species of sharks.

Like many other ocean animals, great white sharks have a somewhat elusive mating process. But, it’s believed to be similar to the other types of fertilization used by sharks. The fertilized eggs are kept inside the female’s body, and the litter consists of two to ten “pups,” or baby sharks. The gestation period is around one year, and when born, great white sharks are around one meter or 3.3 feet in length.

Great white sharks can live to be as old as 70. But, this appears to be on the upper end of the spectrum. It takes male sharks twenty-six years to reach maturity, while it takes females thirty-three years.

What is an Orca?

Orcas are black and white, toothed whales that are part of the oceanic dolphin family. There are believed to be three to five subspecies, or species, of orcas. The main three are described below.

Orcas are known for their large dorsal fin and black and white colors. They have a patch of grey behind the dorsal fin, known as a saddle. Their bodies are tapered, allowing them to swim quickly through the water, like great white sharks. Orcas, despite their status as “killers,” are not a threat to human beings. There has never been a fatal attack on a human being recorded. Despite this, some people still fear these large mammals.

Orcas are widely distributed, more so than any other marine mammal. They live in the coastal areas surrounding most countries and can adapt to any climate. They can be found around the equator and in the waters of the North and South pole.

The highest density of whales, scientists believe, is located around the Norwegian coast, along with the Aleutian Islands, the Gulf of Alaska, and off the coast of Antarctica. Other common areas where the whales are spotted around off British Columbia, Washington, Oregon, Iceland, and the Faroe Islands.

Orcas have a diverse diet. Some orcas only eat fish while others hunt, which led to their name “killer whale.” They prey on mammals, like seals, as well as other dolphins. Orcas have also been known to attack larger whales, like baleen whales.

Orcas sometimes beach themselves to catch seals on land. Meaning they jump out of the water, land on the ice or shore, latch onto their prey, and drag it back into the water.

A female orca gives birth to one offspring every three to ten years. It is partly due to this slow period of reproduction that the species is having trouble repopulating.

Their gestation period is around seventeen months, and once born, the calf nurses for several times an hour for days until the child is weaned. Female orcas mature at around ten years old and reach the height of their fertility around twenty.

Orcas are one of the only animals that undergo menopause and still live for a period after they’re no longer able to have children. Also of interest is the fact that males are mature at the age of fifteen but don’t reproduce for several more years. They live shorter lives than females do, around 30-60 in comparison to 50-100.

Orcas and great white sharks, like all marine animals, are at threat from industrial fishing, nets, pollution, chemical spills, sound pollution, and changes in ocean temperature. As large animals at a high trophic level, the killer whale and great white shark are at particular threat from toxins in the ocean. This is even more true for orcas as they are sensitive to one particular toxin, polychlorinated biphenyls. It can accumulate in their blubber, something that is highly dangerous, especially when food is scarce and the whale metabolizes its blubber for energy.

Great white sharks have been hunted for centuries and are still killed indiscriminately to this day. This is partly due to historic hunting practices and partly due to a general view of the creature as incredibly dangerous to human beings. It may be surprising to learn that the  IUCN lists great white sharks as “vulnerable” due to illegal human fishing and practices such as by-catch. Shark fin soup, a delicacy in some parts of the world, is one of the prime motivators for fishermen. In other instances, sharks get caught in fishing nets meant to protect beaches.

The inaction of the Marine Mammal Protection Act in 1972 ensured that great white sharks, particularly around the United States coast, were protected.

Who would win between a great white shark or orca?

Interestingly, studies show that great white sharks are far more likely to leave an area if an orca passes through than vice versa. These sharks have learned to fear orcas as one of the only marine animals that pose a threat to their lives. If the two were to get into a confrontation, it’s likely that the whale would win.

Yes, there are examples from around the world of orcas preying on and eating great white sharks. They pose a threat to these sharks, as they do to all large marine animals.

What are orcas afraid of?

The only real predator that orcas have to fear are human beings. They have, by far, done the most damage to orca populations around the world. Today, orcas are considered threatened by the IUCN. 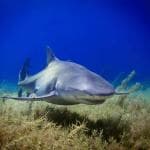 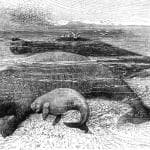