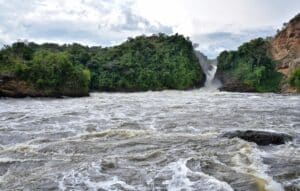 Many of the longest rivers in the world are located in Africa. These rivers are essential to the continental ecosystem.

Africa is the largest continent on Earth, covering miles and miles of desert, jungle, tundras, and much more. All around this vast land are many bodies of water, from lakes to rivers. Africa boasts some of the longest rivers in the world that provide resources for the ecosystems around them, and are vital to many African countries. Let us take a look at the top 5 longest rivers in Africa.

Both the Ubangi and Uele rivers flow into the Congo River. However, as a joint entity, they make up the fifth-longest river in Africa. The Uele is a significant tributary to the Ubangi. The river covers a staggering 2270km, with a drainage basin of 651,915 km2. The river is located in Central Africa and flows between the Central African Republic and the Democratic Republic of Congo.

The Zambezi River, known for Victoria Falls, is the fourth-longest river in Africa. The Zambezi basin, covering an area of 1,390,000 km 2, contains 6 African countries. These are Zambia, Angola, Namibia, Botswana, Zimbabwe, and Mozambique. The 2270 km long river starts its course in Zambia and ends its route in Mozambique, where it empties into the Indian Ocean.

Many animals live in the Zambezi River, including the deadly Nile Crocodile, Nile Monitor Lizard, and the African Rock Python. There are also land animals that live within the basin, such as the African Lion, Leopards, Spotted Hyena, and many more.

The Niger River is the third-longest river in Africa and the most significant river in West Africa. Its drainage basin of a staggering 2,117,700 km2 stretches from the Sierra Leone and Guinea border all the way to the Nigerian coast, into the Atlantic Ocean. The Benue River is considered the main tributary of the Niger River.

The river runs through the famous city of Timbuktu and other cities such as Bamako and Tembakounda. The Niger River also travels through the Sahara Desert before reaching its final destination.

The Congo River, previously known as the Zaire River, is the second-longest river in Africa, extending 4700km along the continent. The congo has supported human life on its shores for centuries, with the river itself being named after the people of the Kingdom of Kongo. The accolades keep coming for the Congo River, as at 220 m maximum depth, it is the world’s deepest river.

Some of the most significant sources that feed into the Congo River are Lake Tanganyika and Lake Mweru. The ferocious Giant Tigerfish is one of many creatures that call the Congo River home, alongside the Nile Crocodile, Dwarf Crocodile, and African Manatee.

The, 6650 km long, Nile River flows through Egypt, Ethiopia, Eritrea, Kenya, Rwanda, Burundi, Tanzania, Uganda, Sudan, South Sudan, the Democratic Republic of the Congo, and eventually into the Mediterranean Sea. The main tributaries of the river are the White Nile, beginning at Lake Victoria, and the Blue Nile.

Due to its immense drainage basin, spanning 3,254,555 km², many civilizations have sprouted from its banks. The most famous are the Ancient Egyptians. The river continues to play an integral part in Egyptian life to this day.

Similar to many African bodies of water, the Nile houses quite a few ferocious animals. The most notorious is the Nile Crocodile, who is feared by many along the river’s bank. Many other species also inhabit the river, such as the Hippopotamus, the Nile Soft Shell Turtle, the Nile River Snake, and the African Tigerfish.

Which is the longest river that flows in Africa?

The Nile is the longest river in Africa. Covering 6650km of African landmass, the Nile flows through 11 separate countries.

Which river is the second-longest river in Africa?

The Congo River is the second-longest river in Africa. The river flows through Central Africa for 4700km.