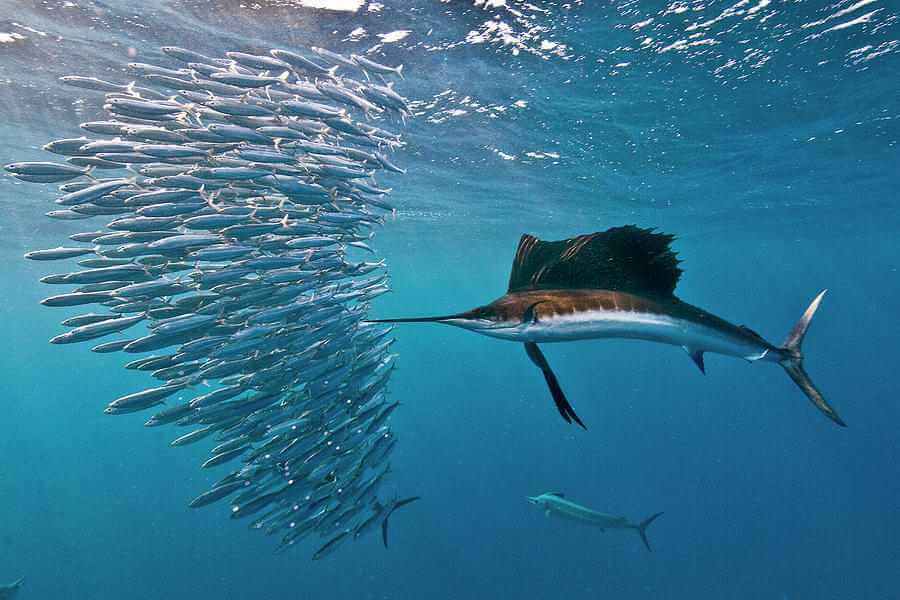 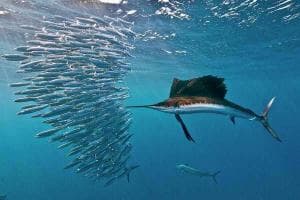 The sailfish is an incredibly interesting marine animal, with the top prize of being the fastest fish in the ocean.

Like a cheetah that runs on land, the Sailfish bullets through the ocean at incredible speeds, making it the fastest wish to swim in Earth’s waters. It’s big, agile, and capable of bursting at extreme speeds to run past predators and catch prey in the blink of an eye. They can swim at speeds reaching a whopping 70mph (about 112 kph).

They have a unique appearance which makes them easily identifiable. Their colors range from blue to gray with white underbellies. A dorsal fin stretches above them (almost as the same length as their body) like a sail, hence where they got their name from. Since sailfish belong to the family of billfish, they have an upper jaw that juts out like a sword similar to a swordfish.

Their bodies are thick and long and can grow up to 10 feet.

Sailfish are not fished as food, instead, they are caught for game fishing ( a type of sport between fishermen) for their incredible speed. When hooked, these beasts will fight vigorously – jumping, leaping, and diving repeatedly against the fishing lines. It takes hours, and is often difficult, to catch a sailfish.

Sailfishes don’t live in coral reefs, coastal areas, or closed-off spaces. Instead, they live in the open ocean. They are found from the surface of the ocean till deep as light can reach, meaning they can be found on both surfaces and at the ocean’s depths.

They live in warm tropical water and therefore are migratory. They move away from the equator in the summer and back towards tropical regions in the winter.

Sailfishes are carnivores and prey on small fishes, octopuses, and squid. Some of its prey include anchovy, herring, mackerel, and more. Its predatory hunting style is unlike a typical predator. For catching food, sailfishes swim into a school of fish and use their long bill to pierce and kill their prey, which it consumes soon after.

Female sailfishes use the dorsal fins to attract a male. Once she releases the eggs, the males then fertilize them outside of the body. A single female can lay up to a million eggs that hatch after two to three days.

Because of their speed and size, sailfishes are only targeted by large ultra-predatory fish like sharks and orcas that are also fast swimmers. Sailfish babies are preyed on by fish that usually eats plankton.

Although they are caught for game fishing, the population of sailfishes is considered stable and is not under any protection or endangered status.

No. Sailfish are extremely predatory and are not human-friendly. In fact, they fight violently when caught in fishing lines.

Where do the sailfish live?

Sailfish can be found in the Atlantic, Pacific, and Indian oceans.

Is there a difference between a sailfish and a swordfish?

Sailfishes are fairly abundant and can be found in the open oceans in warm waters. They are also migratory and travel to tropical waters when the temperatures change according to the climate. 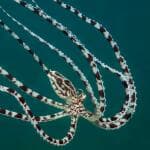 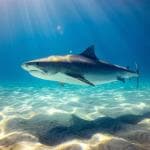