The Mariana Trench reaches 1,580 miles and 2,550 kilometers and a maximum width of 69 kilometers or 43 miles. The maximum known depth is 10,984 meters or 36,037 feet. The water pressure at the bottom of the trench is incredible, more than 1,071 times the normal atmospheric pressure at sea level. Living in this excellent habitat are some of the world’s most exciting and surprising animals. Explore a few of them below.

The dumbo octopus, also known as grimpotheuthis, is a genus of pelagic umbrella octopuses. The name originates from the creature’s resemblance to the character of Dumbo from the 1941 Disney film of the same name. The Dumbo octopus was first discovered around 1883, but the first specimen was not seen until the 1990s after the first deep-sea submersible vessels were invented.

The dumbo octopus is small compared to other octopods, averaging between 20 and 30 centimeters. The octopus gelatinous body allows it to exist at the highly pressured depths it prefers. The extreme pressure keeps its body together, and if brought to the surface, its body would not be able to work correctly. ~

The angler fish is a well-known marine creature thanks to the success of the film Finding Nemo. It’s a reasonably famous creature that’s quite distinctive due to the light protruding from its head. It has an unusually shaped body and sharp teeth. The females usually grow to around 8 inches long, and the males to only an inch in length. The males fuse themselves the females, turning two individuals into one.

The frilled shark was discovered in the 19th century by German ichthyologist Ludwig H.P. Döderlein. It is often referred to as a “living fossil” due to its eery appearance and the shape of its mouth.

The shark has an eel-like body that’s dark brown to grey in color and amphistyly, referring to the articulation of the jaws to the head. Their teeth are widely spaced between 19 and 28 in the upper jaw and 21 to 29 in the lower jaw.

They live near the ocean floor, such as in and around the Mariana Trench, and near to biologically productive areas.

Still unclear what the unusual snout is for

The goblin shark is a rare species of shark. Its unusual and “creepy” appearance is often described as fossil-like (similarly to the frilled shark). It has pink-toned skin and a distinctive snout shape. It is elongated and flat with a protruding jaw and skinny, incredibly sharp teeth.

They can grow to be around 10-13 feet in length and are rarely seen by human beings. This is mostly due to the fact that they live so deep in the ocean, around 100 meters or 330 feet.

A transparent octopus with tubular eyes

The telescope octopus is a transparent, eight-armed octopus that is almost entirely colorless. Their arms are the same size, and they are the only octopus to have tubular eyes. It is incredibly unusual to observe and was originally documented by Dr. William Evans Hoyle in 1885. The octopus is a rare species, meaning there is little that scientists, and the general public, know about the marine creature. But, it’s believed to be a close relative of the glass octopus.

Target the fat that is inside bone to eat

Zombie worms, also known as Osedax, are a type of deep-sea siboglinid polychaetes. The word “Osedax” means “bone-eater” in Latin and refers to the worm’s ability to bore into and eat bones from whale carcasses. They do so in an attempt to reach lipids enclosed inside the bone. They use special root tissues for bone boring.

Has a transparent skull to see potentially predators above it

The Barreleye Fish is another interesting deep-sea creature. They are also sometimes known as spook fish and are found in the temperate waters of the Atlantic, Pacific, and Indian Oceans. The fish are named for the shape of their eyes, which look like tubes or barrels. They are directed upwards in order to allow the fish to detect prey more easily.

The Deep-sea Dragonfish, also known as the scaleless dragonfish, is a deep-sea predator. It, like the angler fish, and produce its own light. They have large teeth, especially compared to their size. The fish are only six inches long, but they have a dragon-like feature that makes them appear as a vicious predator. It creates its light through a process known as bioluminescence. The light is created through the animal’s photophore. The fish uses it to attract prey and potential mates.

Make up the vast majority of sea life on the deep-sea floor, and breathe through their anus

The sea cucumber is a small echinoderm from the class Holothuroidea. They are marina animals with leather-textured skin. Their bodies are long and found on the seafloor around the world. There are around 1,700 species of holothurian around the world, but most are concentrated around the Asian Pacific region. Some of these live in the depths of the Mariana Trench.

They are named for their shape, which clearly resembles a cucumber. Sometimes, sea cucumbers are gathered for human consumption, but they play an important role in marine ecosystems. They break down detritus and other matter, cleaning their ecosystems.

Snailfish is an unusual and interesting species that live in the Arctic to Antarctic Oceans. There are more than 410 species of snailfish known to science. But, there are other undescribed species. They live in depths ranging from the surface to 26,200 feet or around 8,000 meters. Unfortunately, snailfish are uncommonly studied, and little is known about their lives or habits. They are scaleless, though, with loose skin. Their teeth are small, and they have prominent sensory pores on their heads.

Do any animals live in the Mariana Trench?

Yes, many different animals live in the Mariana Trench. Most of these are rarely seen by human beings and have different, interesting attributes.

Is the Mariana Trench toxic?

Deep in the Mariana Trench, there are still examples of human-caused pollution. For example, scientists have discovered mercury pollution there.

Does Megalodon exist in Mariana Trench?

It is very unlikely that Megalodon still exists. But, if it did, it would live in the upper part of the water over the trench rather than in its depths. 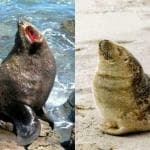 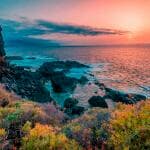