If there is one thing that has fascinated mankind for centuries, it’s the belief that mermaids could be real. From divers to explorers, people have claimed to have seen mermaids with their own eyes. They supposedly appear as human beings, except for the lower portion of their body which is a large fish tail. Could it be true? The origins of Mermaids appear to have come thousands of years ago but still ring true to the present day.

Here are our top picks of mermaid sightings throughout history. Unlike the fakes and hoaxes that passed around, these sightings have something a little truer and different about their claims. Something about them makes it hard to deny the existence of mermaids.

Mermaid corpses were found washed up on the beach

Governor of Gaul wrote a letter to Emperor Augustus about mermaids

Mermaid sightings weren’t something that started recently. Quite the contrary, there have been claims that go as far back as the second century AD. The Hellenized Syrian writer Lucian has mentioned the possible existence of mermaids in his Natural History  9.4.9–11. Pliny the Elder has mentioned and describes numerous sightings of mermaids off the coast of Gaul.

Mermaid corpses were found to be frequently washed up on shore with their bodies covered all over in scales. He also comments that the Governor of Gaul even wrote a letter to Emperor Augustus to inform him about these mythical creatures.

The pirate Blackbeard mentioned mermaids in his logbook

One of the most famous and feared pirates in history has mentioned the possibility of mermaids in his logbook. He had instructed his crew, on several voyages, to stay away from certain charted waters that he called ‘enchanted’ because of mermaids in these areas that Blackbeard and his crew members had reported seeing.

Claimed the mermaids he saw were not beautiful creatures

Historians claim what he saw was manatees

The famous explorer, Columbus, was said to have spotted three mermaids or sirens off the coast of Hispaniola in 1493. He had said that unlike folklore these creatures weren’t beautiful due to some masculine features on their faces. Historians debunk them as possible sightings of manatees. But nobody really knows what Columbus actually saw.

Claimed to be 150cm tall, having spikes on the spine, shoulders, and neck

The local villagers in Kai Islands of Indonesia had a creature that they were familiar with. They called it the orang ikan, translated as man fish. During World War II in 1943, the Japanese soldiers stationed there learned that this was no myth.

These soldiers stationed in a 555 square mile area in the islands had multiple claims of encounters with these “man fish” or as the modern world calls them – mermaids.

The Japanese soldiers recorded not one but many different sightings claiming they all saw the same thing. An amphibious creature that was mostly seen to be in the sea than on land. The marine creatures were 150cm tall, having spikes on the spine, shoulders, and neck. They were said to have light pink skin, similar to salmon, and a mouth like a carp. Instead of a single tail, they had two frog-like long fins and long arms.

One such sighting happened when a troop of soldiers came to a natural lagoon after leisurely exploring the island. The lagoon seemed normal until they saw some thrashing in the water.

Suddenly an orang ikan jumped out of the water and onto a rock. It turned, faced the soldiers, and let out a weird gurgling noise. Another same creature was seen swimming in the water towards them. They didn’t seem friendly and not knowing the creatures’ intentions, the soldiers started shooting at them but the creatures escaped and disappeared out of view.

A sergeant named Mr. Taro requested the villagers to inform him if any of the orang ikan were captured dead or alive. The soldiers summoned the general soon after, who saw these creatures with his own eyes as well.

Mr. Taro tried his best to get the scientific community involved after the war, but unfortunately, it didn’t happen.

Tourists on a Ferry saw a mermaid

In 1967, a ferry with tourists was astonished to spot a blonde mermaid on a beach. The people who saw this marine creature said that she seemed to be eating a raw salmon fish while enjoying the waves splashing upon her.

A similar mermaid spotting incident was reported that same week although a lot of people didn’t believe it was real. Charles White, from the Undersea Gardens, was desperate to prove her existence and offered a $25,000 reward for the mermaid’s capture, even going as far as saying that he would offer a room for the mermaid with whatever she likes. But nobody was able to capture or find the mermaid and as time passed, the story died.

Jeff Leicher, a diver who is a videographer at the Jack Diving Locker of Kauai, claims that he not only saw but came into brief contact with a mermaid.

He was 20 minutes off the coast of Kauai when he saw what looked like a woman just 10 feet away, swimming with a pod of dolphins and keeping up with their fast pace which Leicher thought was obviously odd. She suddenly jumped into the air, revealing her fishtail.

There were ten people on the boat that said they saw the same thing. They were only able to see her jump twice before she disappeared into the water. Leicher thought that was all and he dived into the water to take some photographs of marine life, perhaps hoping he would get a capture of the mermaid too. An hour later, the same mermaid brushed against him while swimming away.

Leicher quickly snapped images and was able to capture her on one photo as she swam away above them. These images were submitted to three high-profile photography labs who analyzed them and said the images were real and hadn’t been tampered with.

Multiple sightings of a young mermaid

NBC claim to have footage of the mermaid, with a $1 million reward still available

This huge incident had the media, the public, and the government all involved to uncover the mysterious mermaid sighting on Kiryat in Israel.

In 2009, some onlookers said that there was a creature that resembled a young girl who would often be found on the beach doing tricks in the water. They kept seeing her for a number of days. It took a while for the news to spread and reach the general public and get the government involved.

When the government did finally get involved, they issued a $1 million reward for anyone who could provide solid proof of the mermaid’s existence. Capturing the mermaid was not necessary and just a photo would suffice.

When the news was out, NBC got out to do some investigation of their own with a film crew at Kiryat. They filmed morning and night, above and below the waters hoping to get some kind of footage of the mermaid. Then late one night, the crew claimed to have seen a human figure dipping into the water.

The research crew did their best to follow the mermaid and capture it on camera but it was to no avail. The mermaid disappeared and the crew was left without solid proof except for some findings and shots by bystanders of the mermaid dipping into the sea. All the footage by both the crew and the bystanders were transferred to the Center for Coastal Ocean Research in Los Angeles.

Michael Shacht, the center’s director, examined the evidence and said that although it was impossible to clearly state that the figure in the footage is a mermaid, it still remained a high possibility.

The $1 million reward still stands and tourists and locals are still on the lookout.

Dam was blocked with divers to fix it

In 2012, Zimbabwe dam workers were trying to install a water pump for local agriculture. When the pumps were blocked, local workers and divers were hired to see what was blocking these pipes. After submerging to investigating these pipes and resurfacing, these local divers and workers swore they would never return to those waters again because they had seen a mermaid.

But the government didn’t believe the workers and their claims of seeing a mermaid in the depths so they hired divers and dam workers from outside. But these new people reported seeing the same thing and refused to go back in there to finish the repairs.

It’s not just the dam and its workers, the people of that land had no doubt about mermaids existing and several have claimed that they’ve seen proof and even the mermaids themselves.

To this day, the dam is still not finished.

It depends on who you ask. Many people around the world believe that mermaids are exactly as described– half-human, half-fish creatures with long hair that live in the ocean’s depths. But many others assume the ancient myths of these creatures are based on sightings of marine animals, like manatees and dugongs.

What are some mermaid facts?

Some mermaid facts include the fact that mermaids were first written about 1,000 BC in Assyria and have since been featured in stories and legends around the world. Many sights are located on the coasts of Ireland and South Africa.

Where do mermaids live?

It’s believed that mermaids live throughout the world’s oceans. Throughout history, there have been mermaid sightings in nearly every country and along every ocean/sea coastline. 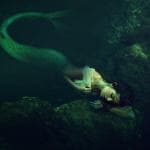